‹Inducements› is the term used in the financial sector for commissions and incentives paid or granted to banks and asset managers by investment product vendors for purchasing these products for their clients. MiFID II is designed to function as a protective mechanism for consumers and heighten transparency in the investment business. However, the directive also entails a huge additional administrative and operational burden for banks and asset managers

Interview with Andreas Hütt, MiFID II Project Manager and Head of Business Development at Sowatec AG on rolling out calculo for client inducement reporting at a prominent global bank.

Read an excerpt from the interview with Andreas Hütt, MiFID II Project Manager and Head of Business Development at Sowatec AG.

What challenges did the EU Markets in Financial Instruments Directive (MiFID II) create which led the bank to launch this project?

As part of a larger MiFID II compliance program, the project was aimed specifically at transparency regarding inducements (commissions from third parties). MiFID II requires financial institutions to disclose to clients the inducements received on client investments.

What implementation difficulties were there in the project and how were these overcome?

One problem was that the MiFID II requirements were only known in draft form when the project started. The details were not finalized and corresponding enactment in national law had not yet occurred. The requirements were thus in large part only addressable based on interpretations and working hypotheses, but as clarifications emerged in the course of the project, these were refined accordingly. Flexible project planning involving six releases allowed iterative implementation of the necessary revisions.

Also, some of the basic data required for calculation were supplied in significantly greater volume than expected, so that sometimes ten times more data had to be processed than expected. The open interface architecture of calculo made it possible however to conduct two-stage preprocessing and performance optimizations without having to discard the original interfaces.

What in your opinion were the key factors for success?

Close cooperation between Sowatec and the bank on the project management and architecture levels, plus the great flexibility of calculo. These made it possible for us to implement the client‘s specific requirements and respond in a timely and cost-effective manner to changing conditions. 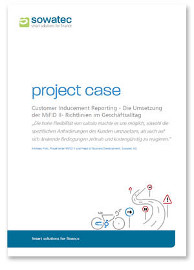